Our customer in Huntingdon Valley, Pennsylvania had purchased a rug from Brandon Oriental Rugs for her sun-room over fifteen years ago.
Needless to say, we were honored by her confidence in our service when, at the beginning of her plans for a makeover of the living room of her home, she visited us again and invited us to help her find a rug to help achieve her goals for the room. She wanted something "non-traditional and unique, but good quality with a refined look; nothing wild but nothing average." With our proprietary Rug-Search(tm) service we located several interesting ideas and forwarded images of them to her. She was very excited by the following idea; which in fact became the rug for her "new" living room: 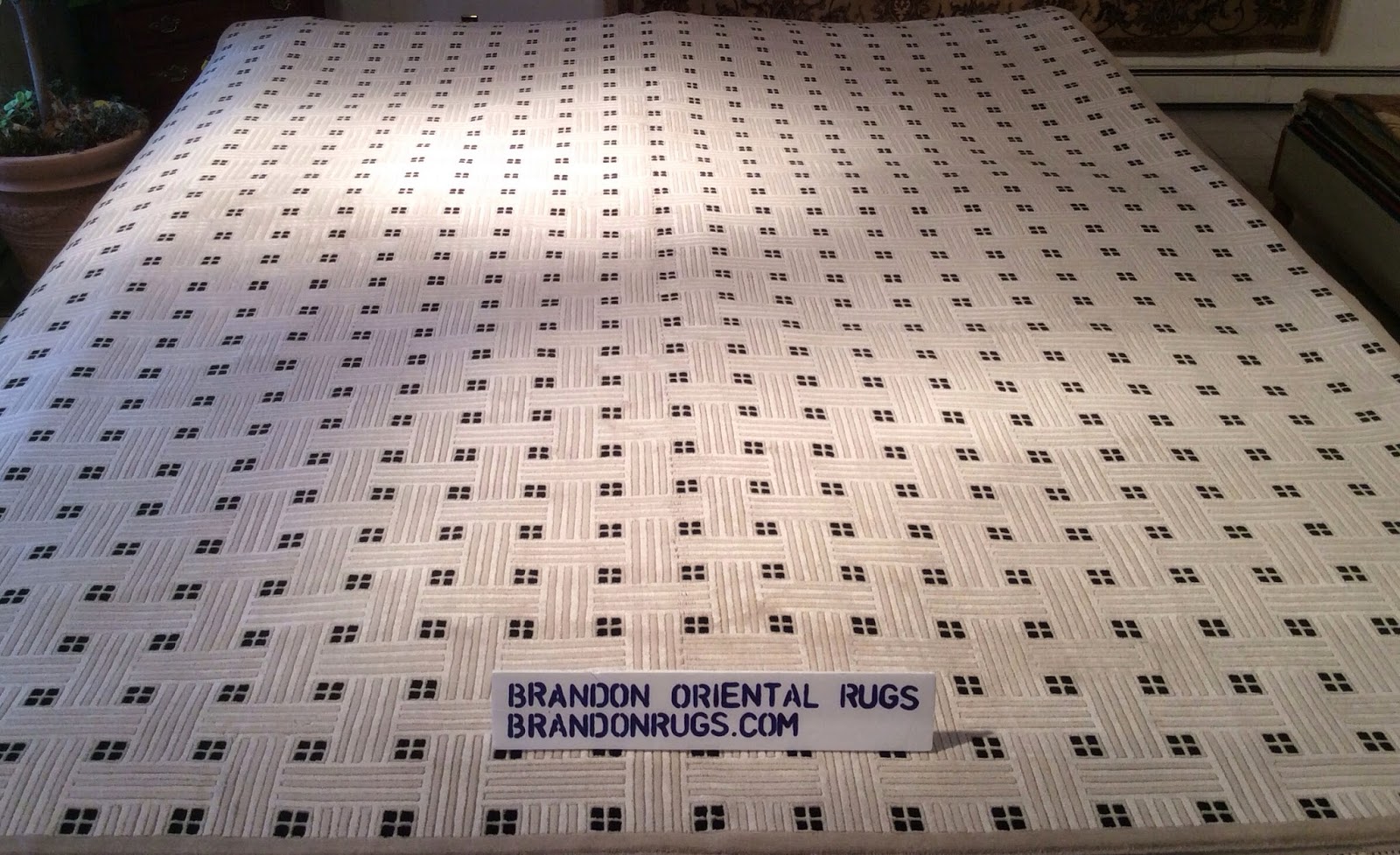 As can be seen from the image below, she is transitioning from the traditional look of her home as originally decorated by her designer just before the advent of the new millenium to a more relaxed, informal style in-keeping with her personal tastes and the fresh new looks of today. 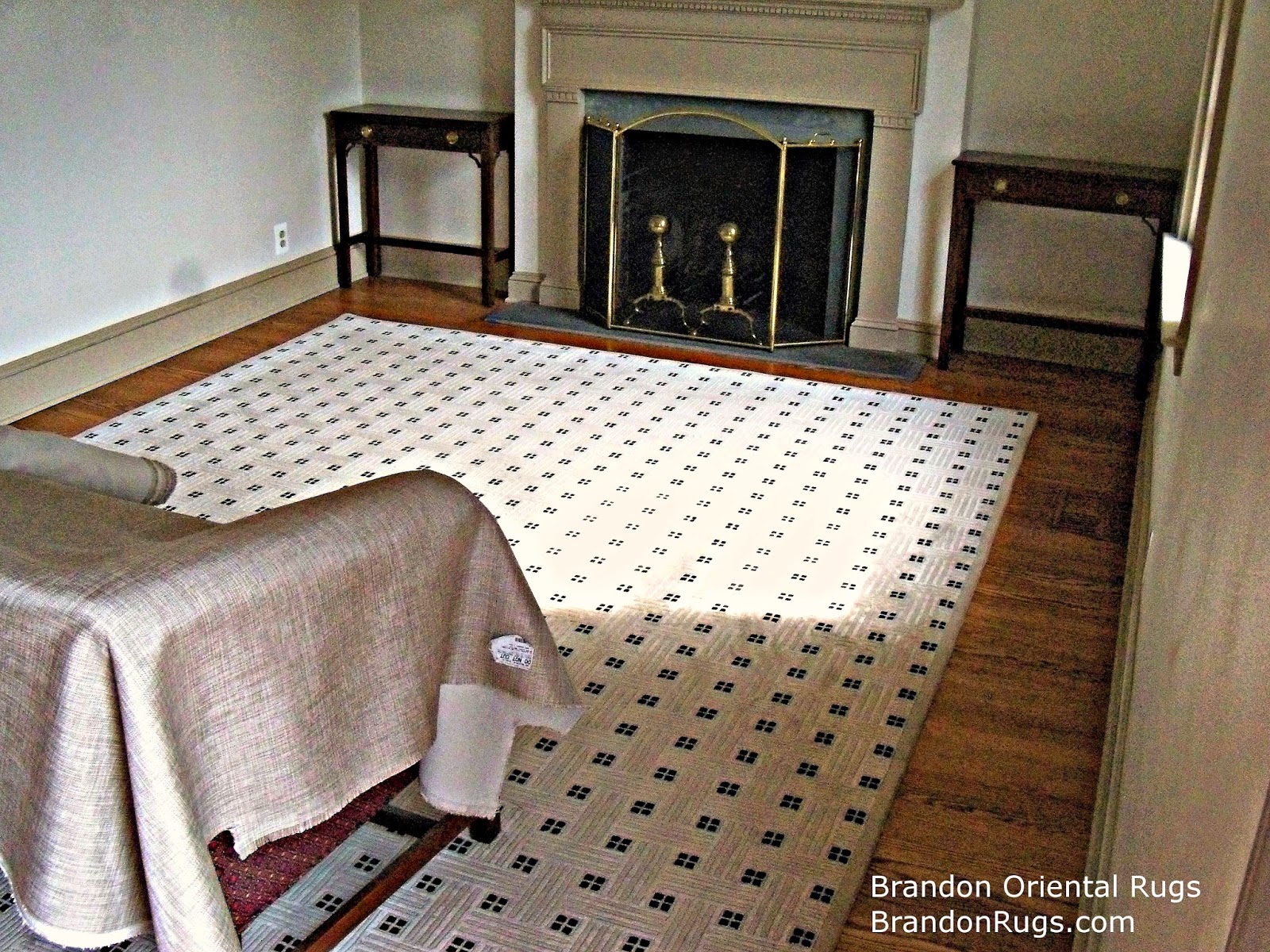 The dark, mini-print patterned fabric of her sofa is going to be re-upholstered with the silvery light fabric you see draping it above. Along with it, the hand-knotted modern carpet selected from Brandon (featuring an infinitely tiled "basket-weave" pattern rendered in a dense, luxuriously soft pile of embossed silk and wool) is all that will remain of the room seen above. 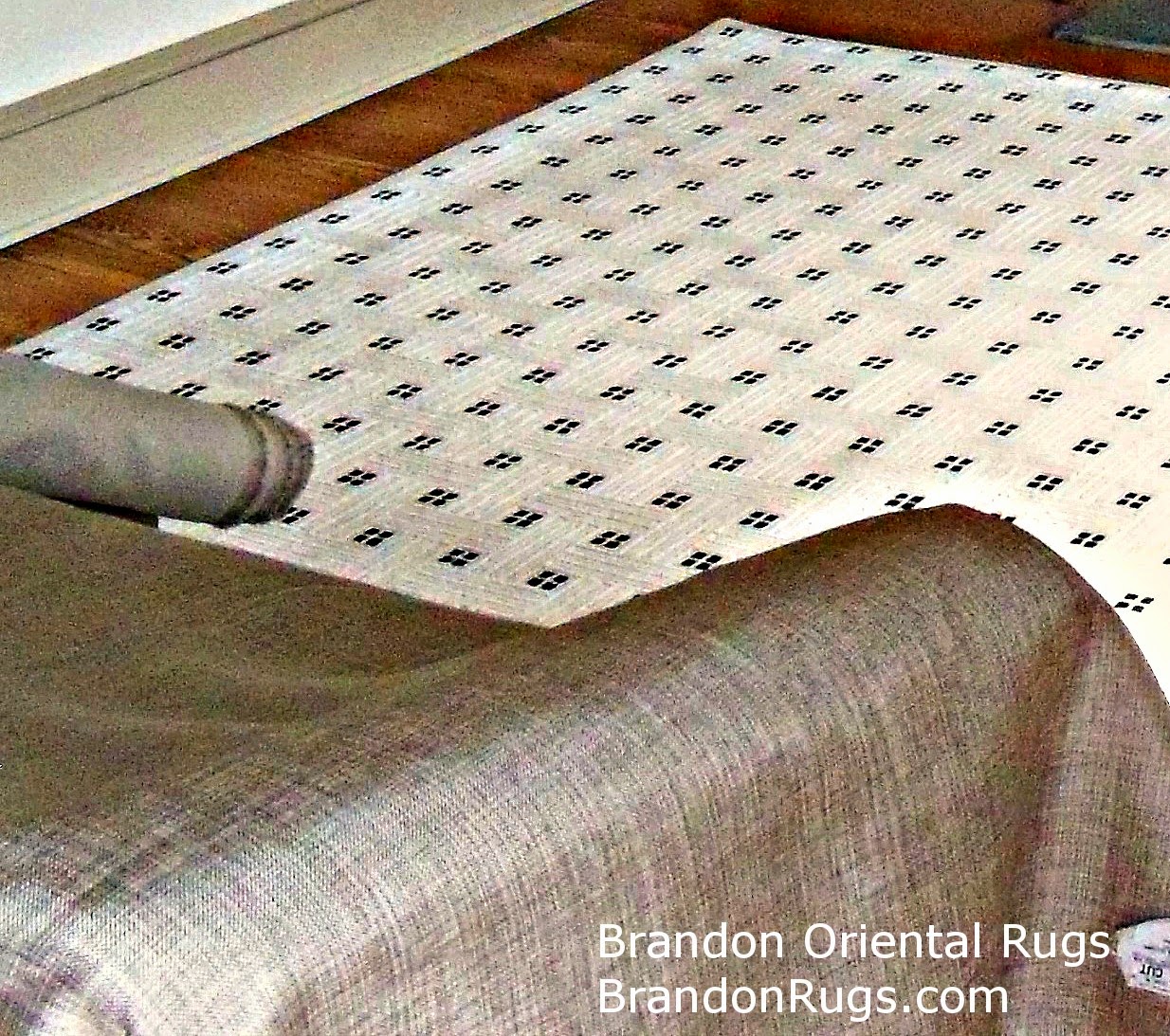 New paint; new fireplace mantle, surround, and hearth; additional seating; and new accessories including the homeowners impressive collection of artworks will soon complete the transformation of this intimate living room from well done but "expected" to exceptionally well done.

And our customer deserves all accolades for what will conclude as a stunning achievement. With patience, study, and regard for her own tastes, she is remaking her home according to her sense of style. As a style-maker she has set aside banality to project into her environment the refined expressions of herself.

Posted by Brandon Oriental Rugs at 8:00 PM No comments:

WSJ: "From Rugs to Riches" article shows that as "works of art worthy to be in works of art", fine oriental rugs have significance beyond just being something to put on the floor.

From Rugs to Riches

There's a widespread fascination with tracking the fate of a human contrivance across centuries and regions—mapmaking, prayer rituals, the use of salt, and the like. The ways such ideas and inventions change, where they pop up and why, open unexpected windows onto the social pageant of our species. "Carpets of the East in Paintings From the West," a little gem of a show at the Metropolitan Museum of Art, taps into that fascination as it examines artistic cross-pollination between three types of 17th-century Oriental carpets and three Dutch paintings of the same era.

Posted by Brandon Oriental Rugs at 5:21 PM No comments:

Our customer in New Hope, PA (who has purchased numerous rugs from Brandon Oriental Rugs since the mid-1990's) recently contacted us to have an heirloom rug cleaned and re-fringed. He has a 9x12 antique, art-deco style Chinese rug he uses in his family dining room. It has been a constant presence in his family's homes since the 1930's; used by one generation after another through all those years. Here are some  images of the rug "BEFORE" cleaning and repair:


Normally, with antique rugs we counsel that the rug be repaired by "overcasting" rather than re-fringing, but this rug had been re-fringed previously (in the 1960's) in a "less than optimal" manner that made undoing that repair impossible without loss of pile. So, after cleaning, an appropriate fringe style was selected to cover the prior repair, and protect the ends of the rug from further damage.
Notice too from the before and after pictures that the furniture impressions present in the rug at intake were removed as a result of washing the rug. Provided the impressions are not associated additionally with wear (or cutting) of the rug pile, or loss of rug knots, washing almost always WILL remove impressions from sofas, tables, chairs, and beds.
Here is the rug "AFTER" cleaning and repair; ready to perform its supporting role in the dining room for many more years: 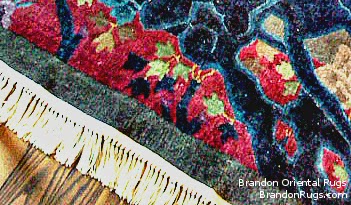 Posted by Brandon Oriental Rugs at 3:02 PM No comments: