With few exceptions -- even among rug stores that claim to be "direct importers" -- the rugs you see when you shop all originated in the inventories of eighty or so importers which produce most of the handmade rugs and associated textiles in the world. Some are names that can be recognized from their branding efforts -- which have yielded mixed results. Nourison, Samad, Safavieh, and Kalaty via massive, long-term advertising campaigns and marketing systems have tried to penetrate formerly under-served markets. (There's a joke in the rug industry that anyone can become an oriental rug dealer who has ten square feet of floor space and a spare $20,000 to "invest" in purchasing "samples". Consequently, if your local convenience store or supermarket doesn't have a rug kiosk yet, it's probably just a matter of time.)  For the most part, however, the rug importers choose to remain unknown to the general public so as to remain dedicated resources for select dealers competent to properly educate and serve interested buyers.
As a result of a business model where all of the rug dealers (nationally and worldwide) are, in effect, "sharing" the inventories of the same importers (producers), it sometimes happens that a price tag from a store that previously held a rug accidentally remains as an artifact on that rug when it gets to the next store. We, at Brandon Oriental Rugs, possess of some of these artifacts and would like to use them here to demonstrate how fine rugs are being represented (or misrepresented) to possible buyers; and how that suggests what some dealers think about the real aspirations and motivations of their customers.
Please appreciate that rug dealers are not "non-profit" enterprises. Although the overhead costs involved in generating a sale often yield slim profits, the bottom-line price of any rug -- the price a customer actually pays to make a purchase -- is structured to yield a profit sufficient to cover the costs of the sale plus a little extra to enable sustainability and growth of the company. As Brandon Oriental Rugs discussed in a prior blog post ( http://brandonrugs.blogspot.com/2011/02/how-is-sale-really-measured.html ) companies use retail formulae which generate "tag prices" for items based on their costs. As shown there, some dealers' prices are REAL prices (what you're really going to pay) while some are "Silly Putty" prices: meant to be seen in an initial-state only for the sake of allowing a customer to be wowed by numerous price manipulations that bring forth (abracadabra style) an "AMAZINGLY LOW SALE PRICE". Granted, most everyone enjoys a good magic show, but few mature observers would deny that the illusions are accomplished with tricks. That being said, in a world that demands "immediate everything", why is the tricky wait-till-ya-see-this stuff tolerated?
Anyway, let's look at some tags. Here's Example #1:﻿﻿
﻿
﻿
﻿
﻿ ﻿ ﻿
﻿
﻿ I can speak from experience, and say that sometime during the late 1970's large department stores fell victim to the guerrilla marketing of upstart "DISCOUNT" marketers. Take your pick of products: from mattresses to shoes to oriental rugs, every department was besieged by the "unbeatable low price" challenge from discounters . The first wave was "50% OFF DEPARTMENT STORE PRICES". Who could resist?

So, as their sales volume plummeted, department stores fought back with the same discount techniques, but "on steroids". (My dad once told me: "As Americans we believe that if a little of something is good, more must be better.") If people wanted discounts, they'd get absolutely incredible discounts ("give the customer what they want".) "60% OFF"; "55-70% OFF"; "65%+10%+5% OFF"; and the killer app "75-80% OFF" have been spun off of prior "Never Before; Never Again" offers.
Who could resist? Who would question such offers to see if they yield REAL savings? But as the evidence above demonstrates, "BIG SALE" offers are manufactured from pricing formulae that don't truly deliver on customers' expectations  to get the "Best Ever Deal" on their purchases.
Here's example #2:
﻿
﻿
﻿ ﻿﻿﻿﻿﻿﻿﻿﻿﻿﻿ 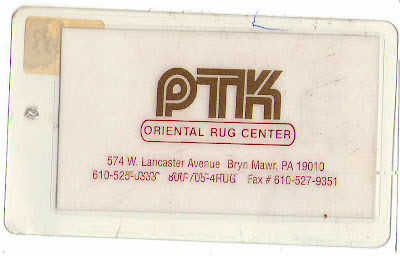 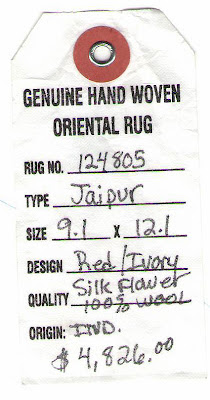 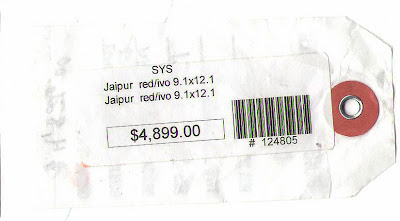 We don't know who created the rug tag above, but it's a curiosity. Of note is the fact that the dealer IS selling at an "actual price" -- which was an average price for the rug type until this year.  The hand-written side shows he's using a formula to develop his tag price ($4,826?). Rather than round down to $4,825 for retailing, he chose to round up (on the printed side) to $4,899. Another question mark comes from the writing on the "Quality" line on the face of the tag. As you see it says "Silk Flower 100%Wool". Something's amiss there. If it's 100% Wool, there's no silk anything about it. If there's actually silk something in it, it can't be 100% wool. (I'd be doing fiber analysis on that rug based on the questions raised by the tag.) 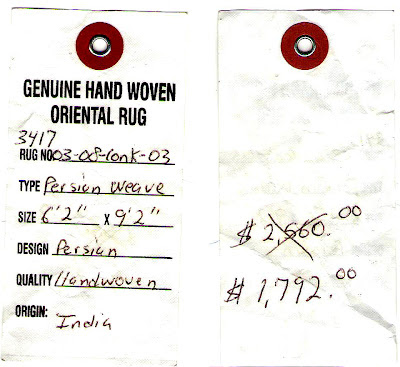 ﻿﻿
﻿﻿﻿﻿We don't know the store responsible for this tag, but the seller apparently doesn't want to commit to telling you what kind of rug you are buying. There are different reasons for the uncertainty. Maybe he doesn't know what kind of rug it actually is, and so gives it a "sounds good", catchall, "Persian Weave" designation. Maybe he doesn't want you to know too much about the rug to prevent you from any effort at comparison shopping. ("Persian Weave" is such a broad class that it actually says little about what you're looking at.) The "dodge" is compounded on the "design" line where the designation is given as "Persian". So we don't know if this is a coarse Persian Heriz  or a fine Persian Tabriz reproduction made in India, and so don't know if the price on the opposite side is good, average, or bad.

We do know the seller is using a set formula to price his rugs. $2,560 is an odd starting price which indicates it was generated as some multiple of a lower wholesale price. The starting price is then discounted 30% to an equally odd selling price of $1,792. ("Not a penny more or less.")

Lastly, Example #4 : "Hide The Price So You Can Make Whatever Deal You Want" Trick-Tag 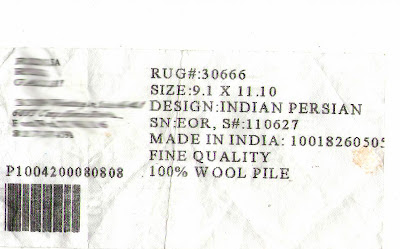 This tag was attached to a rug we cleaned for a customer a couple of years back. They had just moved into the area when their dog added a little extra color to their rug which they had purchased in the mid-1990's. (We've blurred the name of the company in Texas that used this tag -- which is no more but has the same name as a large importer with multiple distribution centers in the South.) The gimmick here is that the tag shows NO obvious selling price, but actually has two prices encoded. The number above the bar-code looks meaningless, but contains the target selling price for this rug. It is $4,200. To give the floor salesperson wiggle room, the wholesale cost of this particular rug is also encoded. It is the number following the meaningless diversion (100) after "Made In India", i.e. $1,826. So, there's $2,374 of wiggle room, which is a lot for a company comfortable with wiggling. In this case, we found out that our customer with the artistic dog did not get a lot of wiggle extended to them. They paid $4,500 for their rug, which was the dealer's target price PLUS the cost of a pad PLUS the cost of delivery. They had a nice rug -- our cleaners were able to remove the dog graffiti -- and obviously they were satisfied with the deal from the Texas rug-dealer all those years ago or they would not have made the purchase. Nonetheless, had they been able to see through this particular trick, they could have held out for a better deal. There are other things deliberately hidden in plain sight with a tag of this type. Again, this dealer does not want to educate buyers about what they are buying. This $4,200 rug is an "Indian Persian" rug. One could as easily label it a "Far Middle East" Rug, and provide as little useful information.

So that concludes our demonstration of rug tag antics. In summary:
1) On the supposition that the gullibility of prospective customers is limitless, stores have adopted pricing strategies that defy credulity -- especially if scrutiny beyond immediate impulse is exerted. Still the prospects can't seem to get enough of the frenzy, and the farce is perpetuated
2) Lost in the diversion of the "BIG SALE" is any attention to educating the buyer about their purchase. People seem to be shopping not for products and benefits, but for prices. (We get innumerably more questions like "What do these things cost?" than we do questions like "What kind of rug is this?" or "Can you show me why one rug costs more than another?" or "What makes one rug better than another?")
3) Because real information is difficult to gather, comparison shopping devolves from the high ground of relative cost-benefit analysis (one rug compared with another; one dealer's price for a particular rug type compared to another's for the same type) to an irrational,  greed-motivated, stimulus-response-conditioned, reflex-logic (reinforced by self-hypnosis) that 85% OFF is obviously better than 60% OFF. The dumbing down of educated consumerism is compounded by the branding craze. (I can explain the differences between a Tabriz rug and a Bidjar rug, for example, and how those differences might translate into price differences. I have no idea how a Martha Stewart Collection rug differs from a Vicente Wolf or Victoria Hagan Collection Rug. Is there any difference other than the different audiences targeted with the use of these and other famous names? In truth, it would make a whole lot more sense to have rug collections devised by the curators of rugs at the world's great museums or by the rug departments of the world's great auction houses than by some fashion designer, or self-promoting celebrity. Whatever Martha and the rest might know about many things, I'd wager that the guys tossing rugs around the rug bazaars of Iran and the other rug making countries know immensely more about what matters when it comes to the subject of handmade rugs.)
4) There are many different levels of interest and appreciation when it comes to satisfying a rug need. As with any pursuit, any effort expended in study will yield worthwhile rewards in improved results. We've seen and helped to participate in expanding many personal rug collections. Those which grow based upon a quality commitment are much more satisfying than those which grow because it's "President's Day Sale" time again.
Posted by Brandon Oriental Rugs at 2:29 AM No comments: