(As you'll see in the images below, these rugs ARE shaggy. As the article points out, they've been around -- and popular -- for some time. Still it's a style that is new for someone; so we invite comments on techniques for vacuuming and care of these rugs from experienced owners -- which we'll append to this post as appropriate for the benefit of readers.)
Morocco’s shaggy chic rugs gain popularity

By Elizabeth Mayhew | Special To The Washington Post (Oct. 30, 2013) (edited repost from KDHNews.com)

There is a craze underfoot. Crack open any shelter magazine or visit nearly any decorating blog and you will be overwhelmed with images of stylish rooms that are anchored by a singular shared object: the Moroccan rug. So what is it that makes these floor coverings suddenly seem as ubiquitous as sisal?
To be clear, the Moroccan rug designs of which I speak are from the Beni Ourain people, who comprise 17 Berber tribes from the Atlas Mountains. The rugs they produce have distinctive designs, which range from ordered geometric shapes to more free-form, expressive patterns. They almost always are in a neutral palette (usually they have an ivory background with brown or black geometric lines), and they have a shaggy pile. 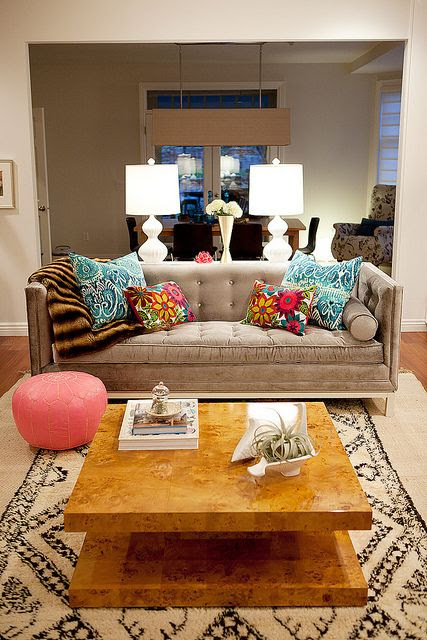 Never intended to be decorative objects, the rugs were originally woven for practical purposes: it is cold in the mountains, so they were used for blankets, shawls and bedcovers. Traditionally the rugs are no wider than 7 feet. You will never find a vintage piece that is wider. This is because the Beni Ourain are nomadic, so no loom can be too large to carry from place to place. And lastly, women who had no formal training traditionally made these rugs, just like the American quilt. Traditional Beni Ourain tribal designs were woven from memory, not patterns, so they have an appealing “quirkiness.” 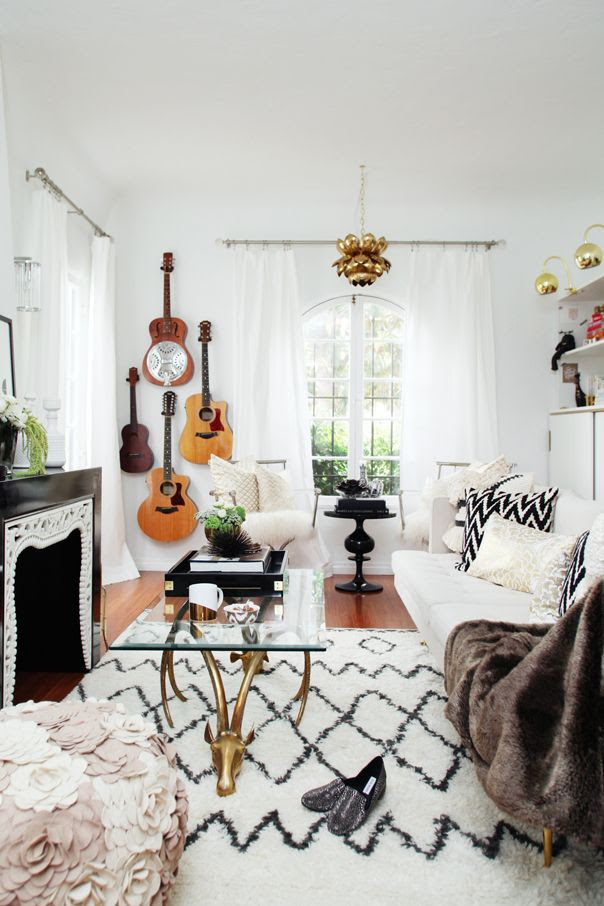 This quirkiness is exactly what makes these rugs appealing to interior designers. “They give a room, particularly a cold modern room, warmth and patina as well as a dose of ethnicity,” said Timothy Whealon of Timothy Whealon Interiors in New York. The converse is also true: The idiosyncratic patterns of Beni Ourain designs give more traditional rooms a much-needed shot of modernity. It is because of this versatility that decorators have used them for years; and will continue to use them. “I don’t see them as trendy; I see them as timeless.” 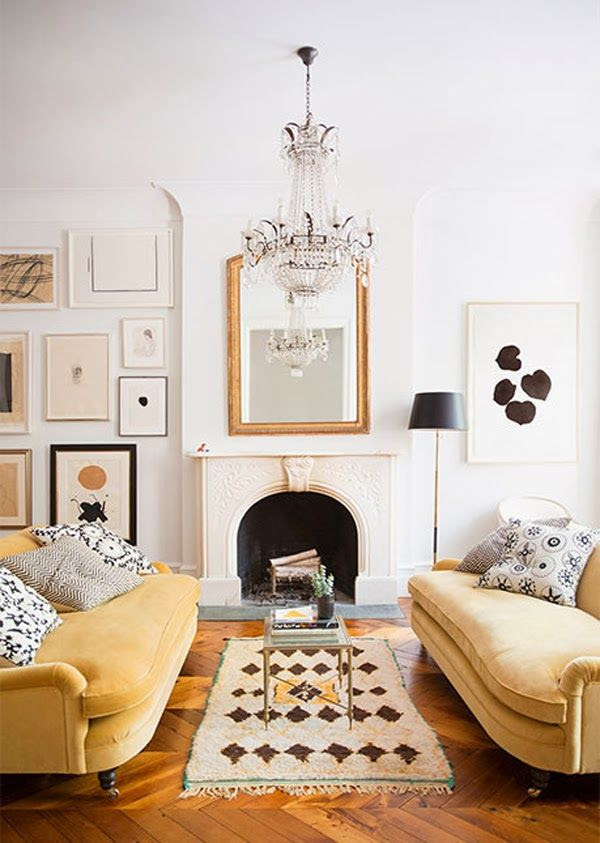 Designers and tastemakers have had a love fest with these rugs. In Paris in the 1920s and 1930s, designers used Moroccan rugs for their inherent sense of modernity and ethnographic qualities. A couple of decades later, mid-century modernists, such as Le Corbusier and Charles and Ray Eames, were known to use the same fluffy piled rugs as a counterpoint to their sleekly designed furniture. In 1972, Billy Baldwin chose a room with a diamond-patterned Beni Ourain rug for the cover of his book “Billy Baldwin Decorates,” which illustrates his masterful ability to bridge style and comfort. 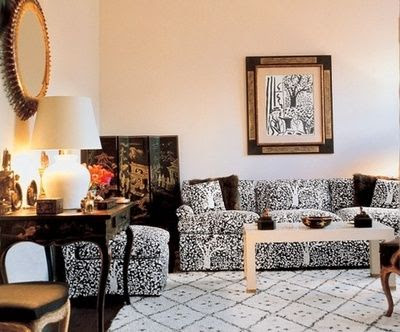 Although it has been a staple in the haute decorating world for almost a century, the Moroccan rug filtered into the mainstream only in the past 10 years, thanks in part to magazines whose editors suggested that readers “try this neutral Moroccan rug as an alternative to sisal.”
Rug companies caught on. Although vintage pieces are still available on the market, they are often too long and narrow for many spaces. New, larger sizes (both standard and custom) are now available from many rug producers and their dealer networks. Ironically, few new Beni Ourain style rugs are made in Morocco. Morocco is still largely tribal, making production hard to control, so companies have found weavers in other countries. 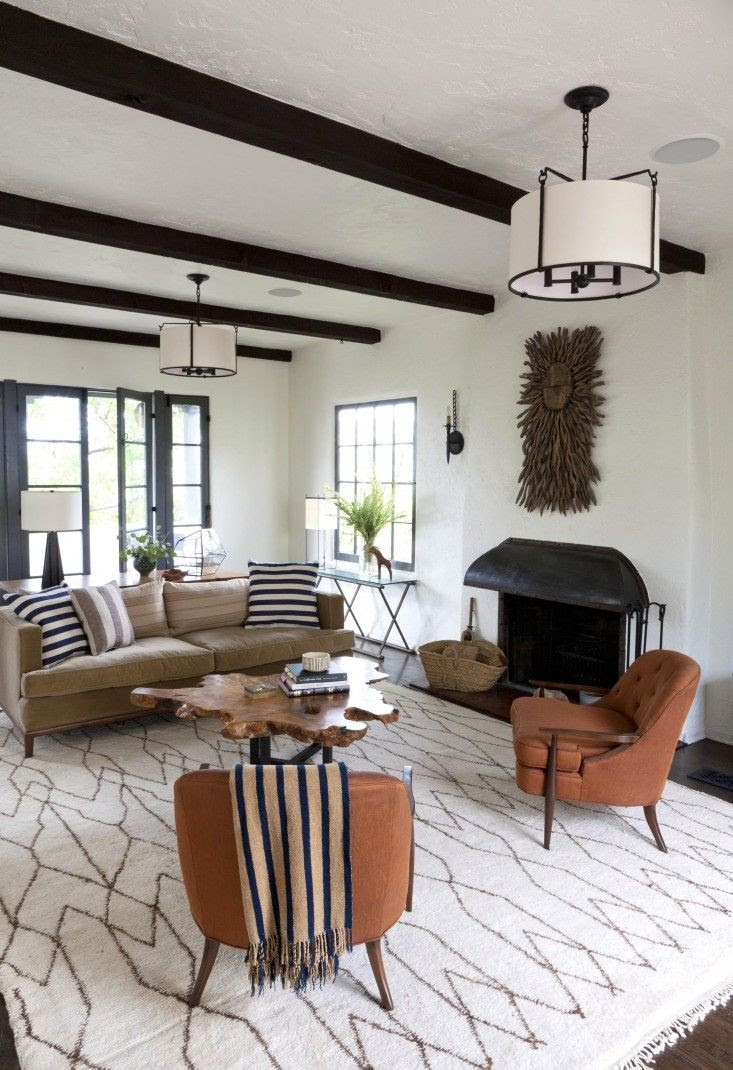