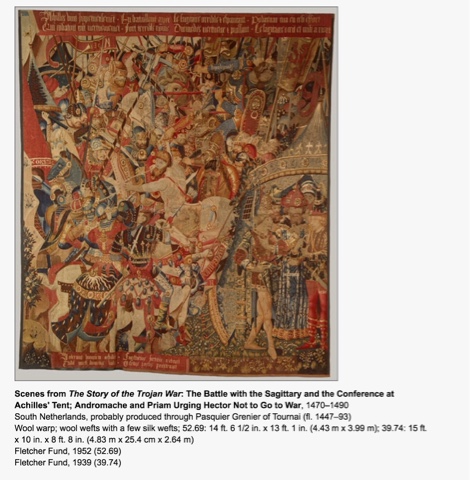 The word tapestry is now widely used to describe a range of textiles, including needlepoint and certain mechanically woven, ribbed fabrics, but historically and technically it designates a figurative weft-faced textile woven by hand on a loom. In European practice, the loom consists of two rollers, between which plain warp threads (the load-bearing threads) are stretched. In the large-scale production of centers in France and the Low Countries (modern-day Belgium), the warps were made of wool, although linen was also used in more artisanal production in Germany. Depending on the orientation of the loom, the warps are stretched vertically on a high-warp loom or horizontally on a low-warp loom; in both cases, the weaver works on the reverse side of the tapestry. The warps are arranged so there is a small space between the even and odd warps, called the shed, through which the weaver passes the colored weft threads that are wrapped around a handheld shuttle. Alternate warps are attached to drawstrings with which the weaver can pull them forward (on the high-warp loom) or backward (on the low-warp loom) to create a second shed, through which the weft is then passed back again. By passing the weft back and forth through the two sheds, the weaver inserts the weft over one warp and under the next in one direction and then back in the opposite direction over and under the alternate warps. Periodically, the weaver beats down the developing web so that the warps are completely covered by the weft. 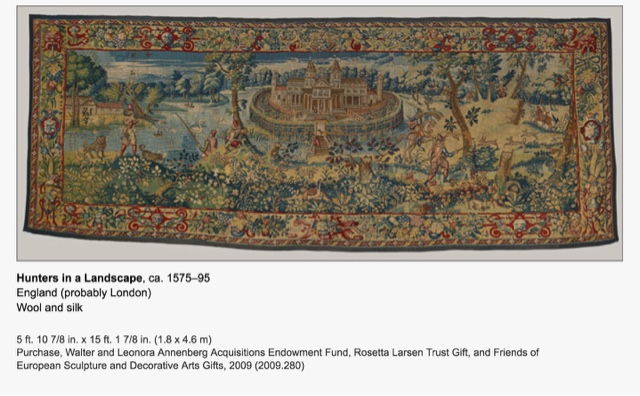 Nowadays, the weft threads are primarily made of finely twisted wool, but in the past, finer tapestries also included silk and gilt-metal-wrapped silk. By varying the colors of the weft, the weaver creates a pattern or figurative image. Between 1400 and 1530, Flemish weavers developed the ability to reproduce an extraordinary range of surface textures and painterly effects through the use of finer and finer interlocking triangles of color (hatchings or hachures), the juxtaposition of different materials, and the use of different techniques to link the weft threads; compare, for example, Scene from the Trojan War (52.69), Triumph of Fame(1998.205), Last Supper (1975.1.1915) and Bridal Chamber of Herse(41.190.135). 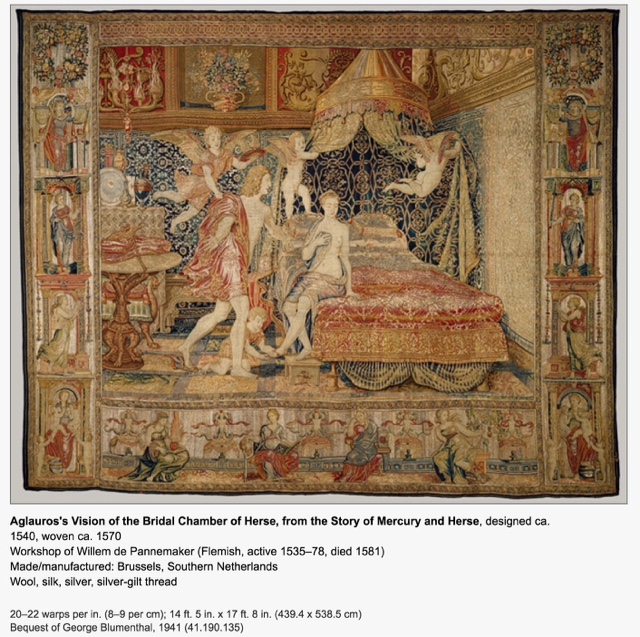 In European medieval and Renaissance practice, the design was invariably copied from a full-scale colored pattern, known as the cartoon, a practice that continues to this day. Before starting work, the weaver traces the pattern from the cartoon onto the bare warps. With the high-warp loom, the cartoon is then hung behind the weaver; with the low-warp loom, it was traditionally folded or cut into strips and placed directly beneath the warp threads, creating a proximity that is especially useful for the weaver in the case of complex designs. An additional advantage of the low-warp loom is that the drawstrings used by the weaver to create the sheds are controlled by foot pedals, leaving the weaver's hands free to pass the weft. On the high-warp loom, the drawstrings are manipulated by hand so the process is slower. The disadvantage of the low-warp technique is that it reverses the orientation of the cartoon, since the weaver is copying the front of the cartoon from the back of the tapestry. The designer therefore needs to create the cartoon to be used for the low-warp technique in the direction opposite to the one intended for the completed tapestry. There is otherwise little physical distinction between the product of the high- and low-warp looms. The low-warp technique was the predominant mode of production through the medieval and Renaissance period because of the advantages it offered in terms of speed of production and reproduction of complex designs. 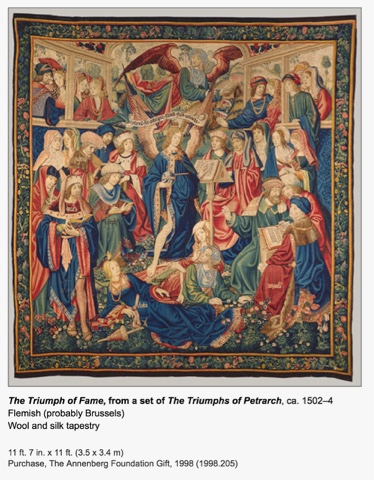 The quality of a tapestry depends mainly on four variable factors: the quality of the cartoon from which it is copied: the skill of the weavers at translating the design into woven form; the fineness of the weave (the number of warps per centimeter and the grade of the weft, which directly affect the precision of detail and pictorial quality of the tapestry); and the quality of the materials from which it is made. In the late Middle Ages and the Renaissance, the cost of a tapestry varied enormously in direct proportion to its quality. One of the key factors was the manpower involved. Production was a labor-intensive process requiring the participation of many skilled weavers for the execution of large tapestries. On the basis of both modern practice and documented production, it is generally estimated that weavers could produce up to one square yard of coarse tapestry per month. Higher-quality production, with a finer warp and weft count, was much slower, yielding perhaps half a square yard or less per month. A large tapestry, five yards high by eight yards wide, woven in wool alone, with a warp count of approximately fifteen per inch, would have taken five weavers some eight months or so to weave. If finer materials were used, resulting in a higher warp count, it could take much longer. Production of a set of six five-by-eight-yard tapestries would therefore have necessitated the equivalent of thirty weavers over a period of between eight and sixteen months, excluding the cost and time involved in the design and preparation of the cartoons and the setting up of the looms.

An even more significant factor than labor in determining the cost of a tapestry was the material from which it was made. Wool, generally from England (2009.280) or Spain, was the principal material used for warps and most of the weft. Finer-quality pieces also incorporated silk (from Italy or Spain), and the finest included silver- and gilt-metal-wrapped silk thread (from Venice or Cyprus). Documents relating to the levy charged for different grades of tapestry imported to England during the first half of the sixteenth century indicate that tapestry woven with silk cost four times more than that woven with coarse wool. The inclusion of metallic thread increased the cost by a factor of twenty over tapestry woven with coarse wool alone. While such valuations are general and the prices would have been dependent on the circumstances in which tapestries were made and sold, documentary evidence confirms the extreme variation of price.