"If something is exceptionally well done it has embedded in its very existence the aim of lifting the common denominator rather than catering to it. " Edward Fischer


Mohammad Seirafian along with his father Haj Reza Seirafian is the founder of Seirafian Carpet. He is the greatest designer and producer of Persian Carpets in the twentieth century.
He is also a scholar and philanthropist. In a tremendous act of generosity, (and with zero support from any governments) he donated his greatest masterpiece to the United Nations to bring a message of peace and unity to the the world. This incredible masterpiece contains more than 1350 knots per every square inch and took 10 years to make! It is a testimony to the men and women of , who put their hearts and souls into this beautiful work of art to express the humanity of the Iranian people to the rest of the world. Seirafian will go down in history as one of the greatest, most influential artists of our time. 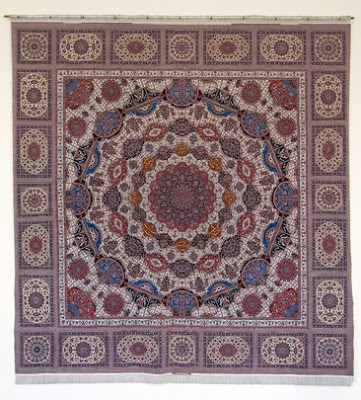 Mohammad Seirafian's masterpiece, "Oneness of Mankind", in the UN Headquarters in New York. The 25 square meter (approx. 16'3" x 16'3") rug contains the famous verse from the 12 century Iranian poet, Sa'di Shirazi. The verses of the famous poem, "Oneness of Mankind" is woven into the rug  in pure gold.
Posted by Brandon Oriental Rugs at 3:37 PM